Want to learn more about Savannah Cats? Click the links below to read about this amazing breed: 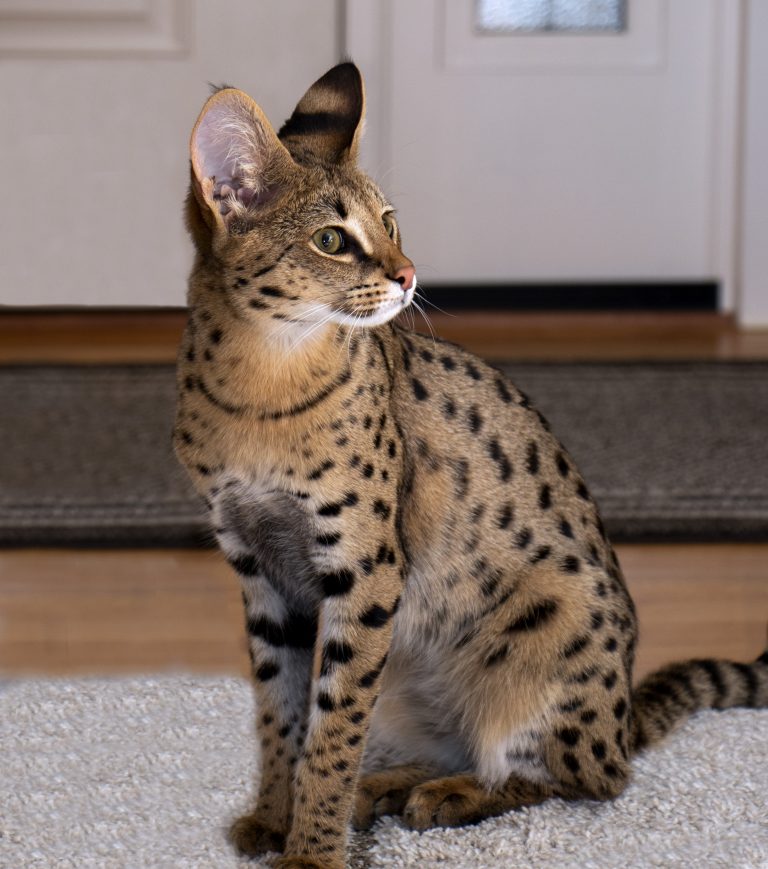 What is a savannah cat

The hybrid Savannah cat is an exotic feline which is a cross between the Wild African Serval and a domesticated house cat. It is the largest and tallest domestic cat breed with a very distinctive color and extraordinary personality. This unique breed became popular in the 1990s and in 2001 the Savannah was officially accepted as a registered breed into The International Cat Association (TICA).

Breeding the perfect Savannah cat is not easy and takes a lot of patience as well as practice. Here at One Elite Savannah we specialize in breeding F1 and F2 kittens. We put in lots of time, effort and love into our cats and kittens. 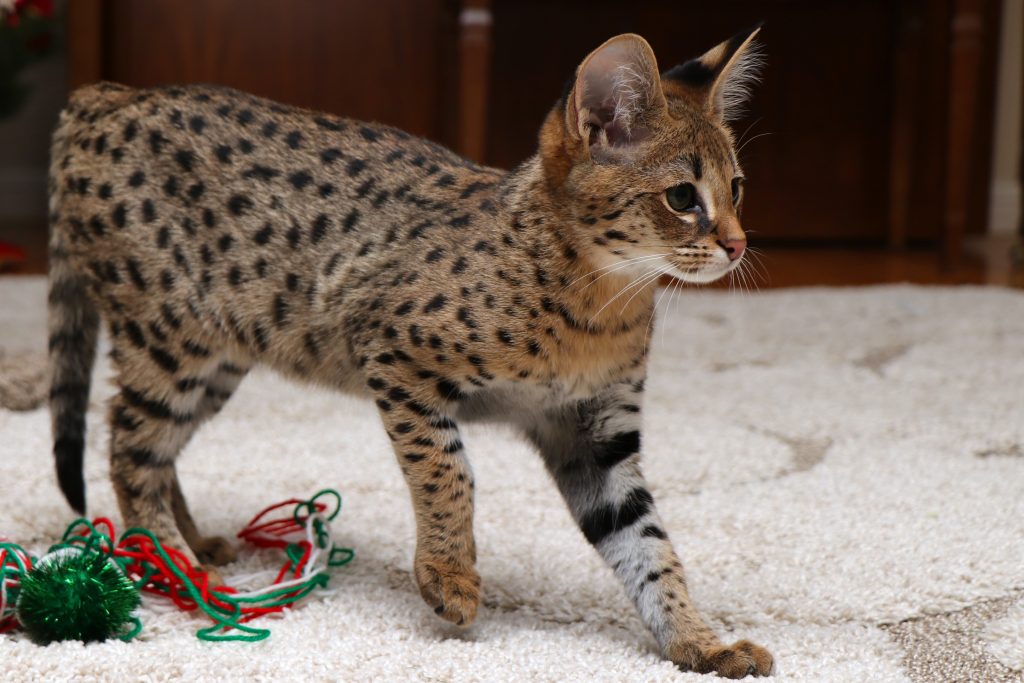 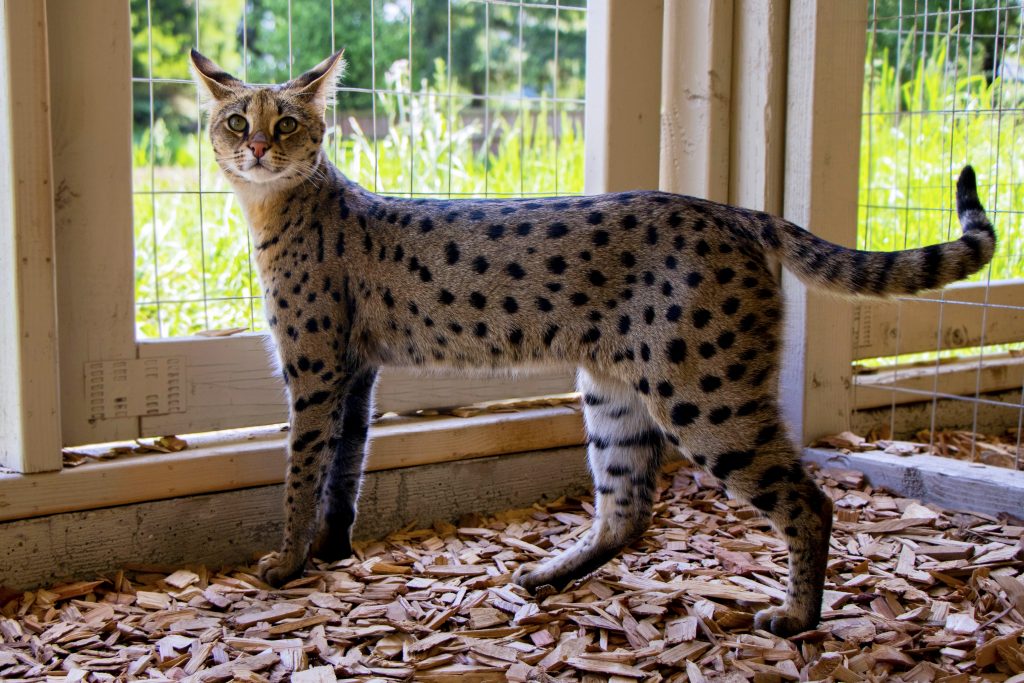 Classifying and categorizing the different Savannah generations can become quite confusing, but we are here to break it down and make it simple for you.

If two Savannahs are bred together then the kitten will be one filial generation less than the parent with the higher number. For example a female F2 Savannah x a male F6 Savannah = F3 savannah kittens.

Savannah percentages are estimations of how much serval blood is present in a Savannah kitten. The higher the percentage the more “wild” a kitten will be. The percentages can be more or less depending on the strength of the genes and the blood line of the serval with whom the savannah has been bred. 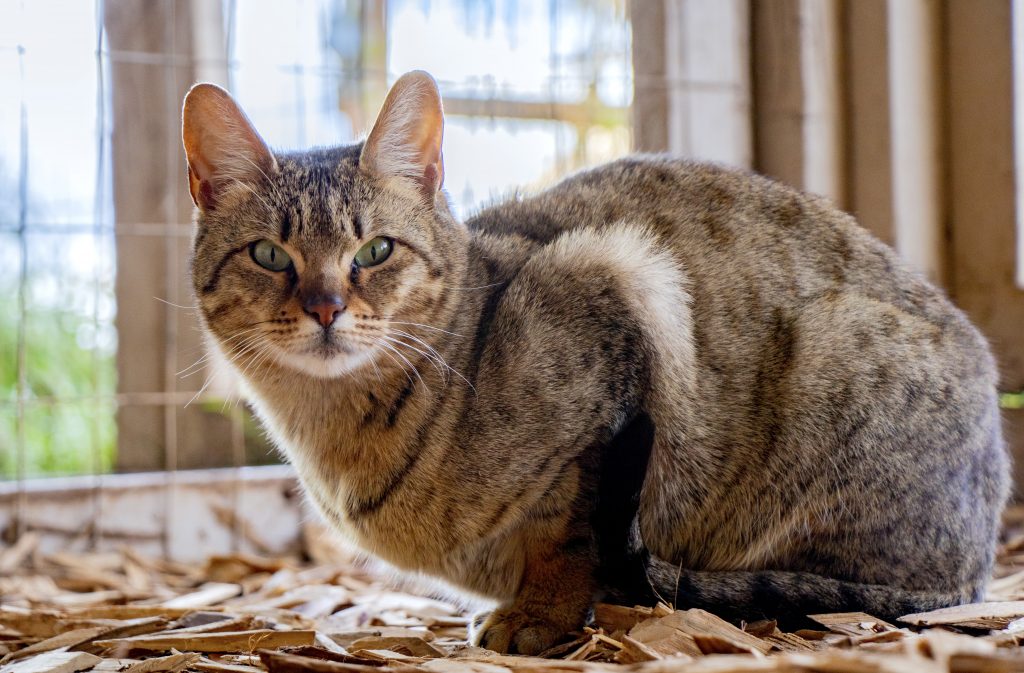 Why are so many different letters needed to classify a Savannah? The purpose for these letters is for registering Savannah kittens in TICA. The letters are used as an organization method to explain the number of generations of savannah matings that are in a pedigree or background of a Savannah.

B – kitten will have two “A” Savannah parents and a grandparent who is not a Savannah.

C – kitten will have two “B” Savannah parents, two “A” Savannah grandparents and a great grandparent who is not a Savannah.

Savannahs come in many unique colors such as snow, blue, chocolate and even cinnamon. However, TICA only accepts certain colors of Savannahs to participate in a cat show. The accepted colors are brown, silver, black and black smoke tabby cats. We only specialize in breeding brown-spotted Savannah cats. We do not breed silver, black or black smoke Savannahs.  (TICA standards)

Agouti Cat: the Savannah is a breed that has hair with alternating bands of yellow and black pigmentation on the shaft of a hair. The banding on the hair os known as Agouti. A DNA test can determine what type of Agouti gene a Savannah has or carries. However, this can also be physically observed.

Savannahs also come in many different patterns like rosette or marble, but again, TICA only accepts spotted patterns. This is because the Serval has a spotted coat pattern and a Savannah with spots most greatly represents that trait of the Serval. We try to stay away from non standard patterns and only breed Savannahs with spotted coats. (TICA standards)

Brown is the most popular Savannah color that the majority of people prefer. A brown-spotted tabby closely resembles its ancestor, the Serval and has a wild, unique look. The brown hue can range from a cool to warm tone and an array of shades from tan to gold.

Silver is the second most popular Savannah color. It is produced when a certain inhibitor gene is present in a Savannah’s DNA and the pigment in the agouti hair gets eliminated. So instead of the brown bands, silver bands are present which produces a silver coat color.

Black Savannahs may look like they don’t have any spots, but if the lighting is perfect than dark spots can be observed. Black smoke Savannahs have light roots that can appear throughout the coat giving a swirly, smoke-like effect to the coat. Neither the black or black smoke coats have banding on the hair shaft so they are considered non-Agouti cats.

Savannahs are very long, tall cats. Their size depends on their genes and the amount of Serval blood that they contain. Male Savannahs are bigger than female Savannahs, but the height difference is not very drastic. Below are the Serval and Savannah height measurements for comparison:

Savannahs are very athletic cats that are very active. They have an athletic build with lean muscles. Their weight also depends on the their parents and the amount of Serval blood. Male Savannahs are a little bit heavier than female Savannahs. Below are the Serval and Savannah weight measurements for comparison:

Dogs are said to be a man’s best friend, but whoever owns a Savannah knows that this statement can be argued. Savannah’s have a very unique personality and even though they might not be your average lap cat, they do love attention and the occasional belly rub. These cats are very outgoing and energetic, so they do require a lot of attention. They are also very loving and sweet and if they get attached to their human, they become loyal and devoted. Savannahs are cats that have a dog-like personality. They are highly intelligent cats and can be taught to walk on a leash and do different tricks. A Savannah likes to catch different objects especially balls and can be taught to play fetch. Unlike a house cat, Savannahs love water, and swimming is one of their favorite things to do.

We constantly spend time with our Savannahs and teach them different tricks. For example, We taught our F1 Savannah Arzy the command “Sit” and every time she hears the command, she sits. We also taught her “Jump” so when she hears that command she knows she needs to jump. All of our Savannahs are very familiar with the command “NO”. When they hear this word then they know they should stop what they’re doing because their behavior is unacceptable. 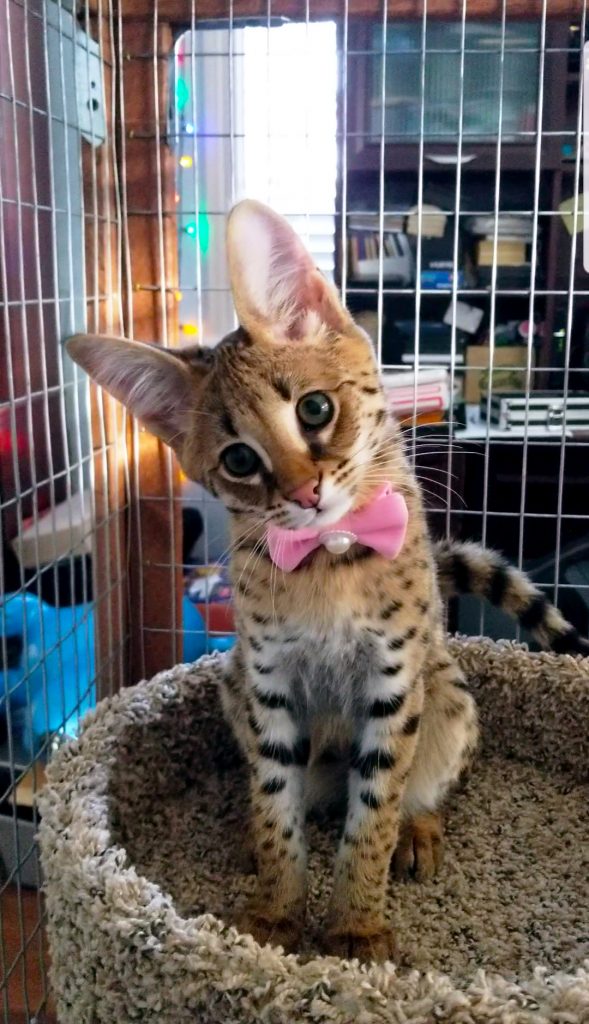 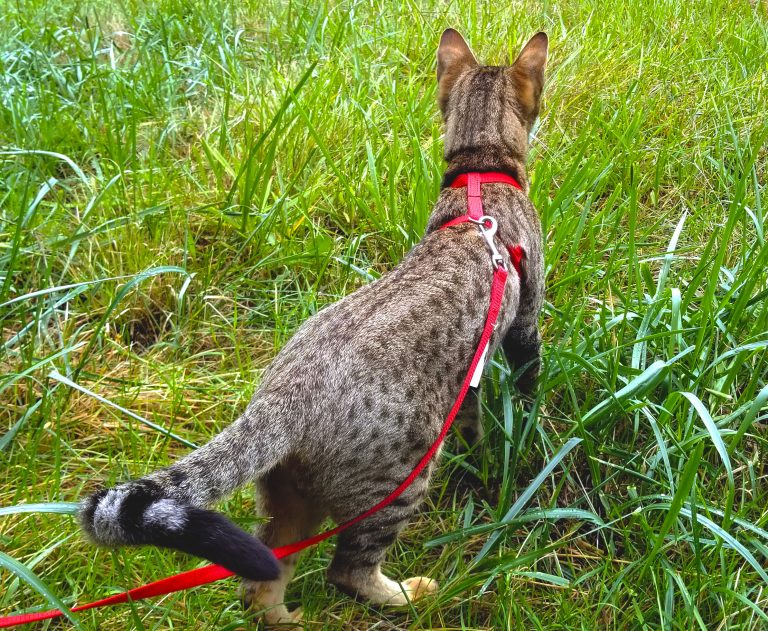 Savannahs require a combination of foods to support their health and provide energy. We feed our Savannahs high quality dry and wet cat food as well as raw home grown meat.

Our kittens stay with their mom and drink milk for about 7 weeks. After they start eating dry food, we start to give them a little bit of canned meat, which is a combination of certain vegetables and chicken meat. We also provide dry food specifically for kittens and we alternate these foods in order for them to have a well balanced nutritious diet.

Our Savannah are also fed dry and wet food as well as raw meat. We try to keep a strict grain free diet and stay away from meats that contain small bones because that could cause choking.

All of our kittens come litter box trained before going to a new home. Our wonderful Savannah moms take care of their kittens a minimum of 7 weeks and teach them how to use the litter box. However, sometime a kitten might have an accident. When you see that this is happening then it is best to take a towel, put it under the kitten and take it to the litter box. They will soon understand where you want them to do their business.
Back To Top 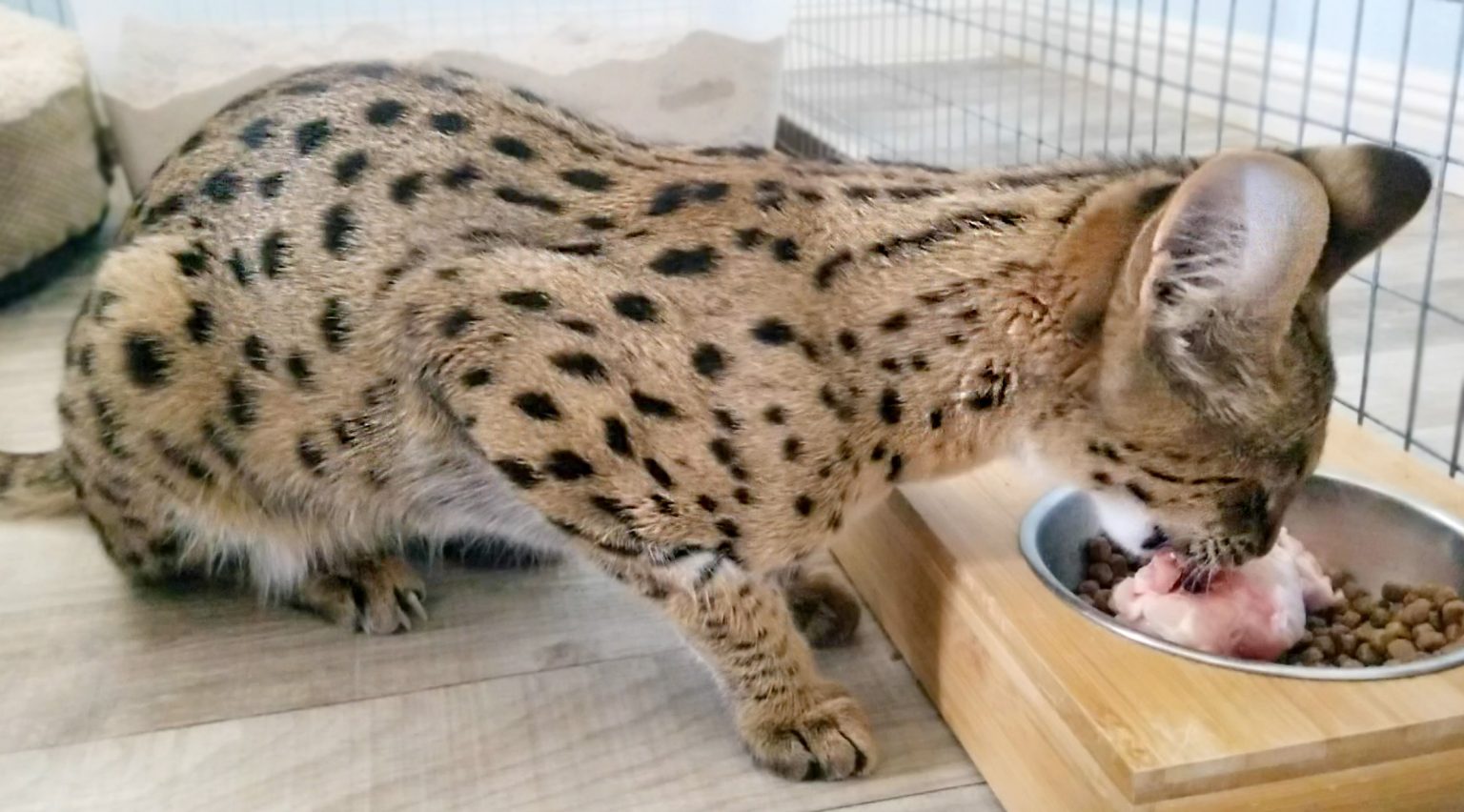 It is important to find a vet clinic that specializes or is educated on how to provide care for exotic animals. Before coming, let your veterinarian know that you have a hybrid savannah kitten or cat so that they can educate themselves and be able to provide the best care for your furry friend. If you have any questions about the health of your kitten or about trips to the vet, feel free to contact us and ask questions. We are always happy to help!
Back To Top

The decision of spraying/neutering a kitten is up to the owner of the Savannah. You as the owner will have to decide if you want your Savannah to be fixed. A reason for fixing would be if you want the Savannah only as a pet and not for breeding. As a side note, F1-F4 generations are sterile, but every Savannah cat is different and even an F3 might surprise you. However, before deciding this question, we recommend that you research about the procedure and talk with your vet about anesthesia and medications.
Back To Top

Our cattery does not support declawing!
Please do not declaw your Savannah cat! This procedure is not a simple trim of the nails. It includes amputating the first joint of the toe and this can lead to many health issues such as deformation of the paws and life-long chronic pain. We advise you to take this procedure seriously and educate yourself before making such a big decision. There are other ways that you can keep your cat from scratching the furniture such as getting them a scratching post or scratch deterrent spray and tape.
Here are some resources on how to stop your cat from scratching: Chewy, PetMD.
Back To Top

Why are Savannahs an expensive cat breed?

Is the Savannah the Right cat for you?

The Savannah is a very energetic cat breed. They love to run outside, play with toys and are in need of constant attention. If you want a quiet, calm, lazy cat then the Savannah is not for you. But if you want a lifelong, devoted companion that is as loyal as a canine, then you might consider getting a Savannah.

A Savannah is right for you if you:

A Savannah might not be right for you if you: 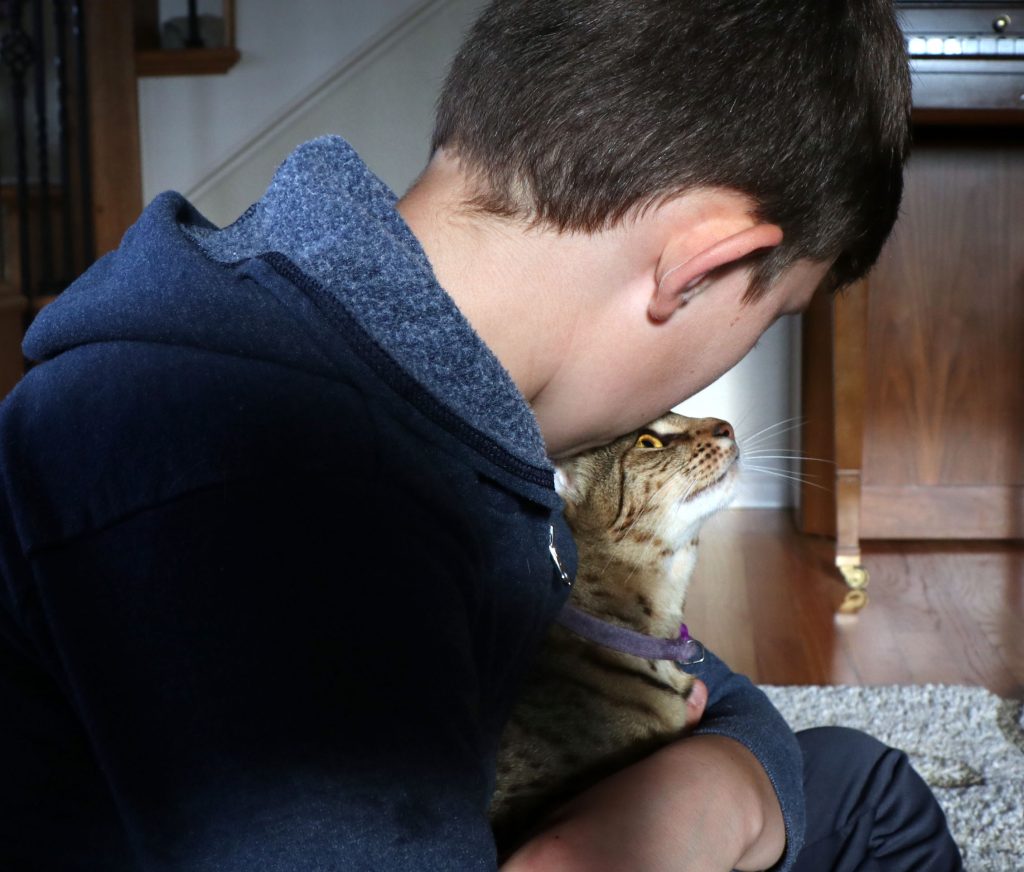 Does your state allow you to own a savannah?

Some States do not allow Savannah cats because they are a hybrid breed and before purchasing a Savannah, it is important for you to know your State’s laws on hybrids. Each State has different laws and they frequently change. The best way to find out if your State allows you to own a hybrid is to visit hybridlaw.com and by clicking on your State, you will find the needed information. 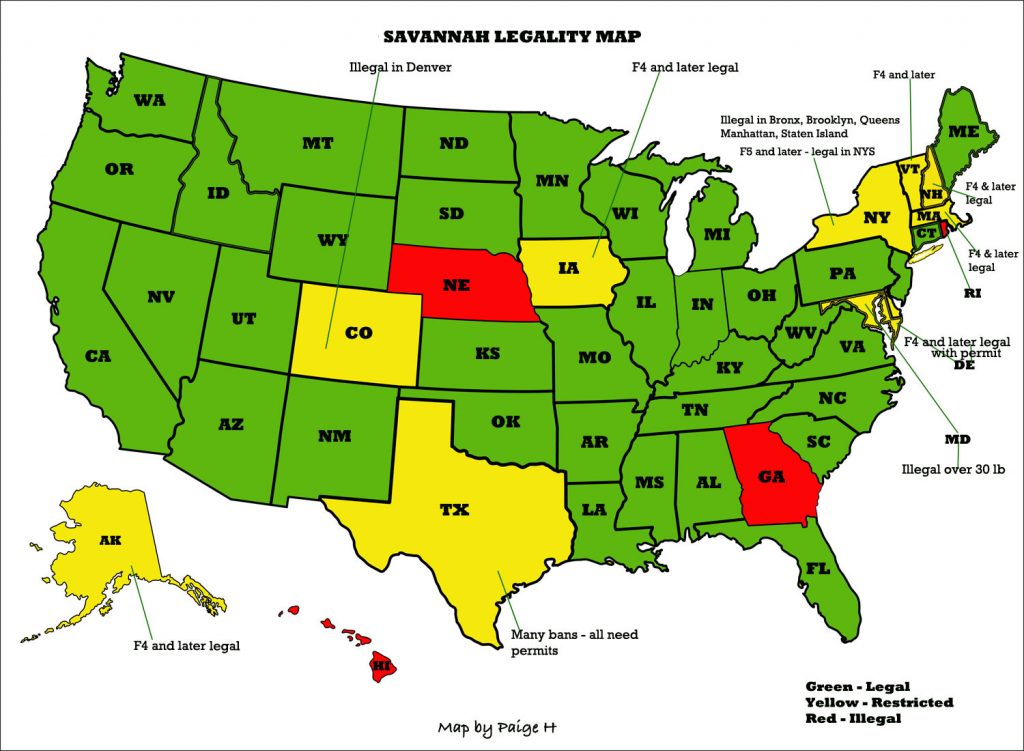